Our Thinking
Women in IT

Last week, a colleague brought a conference to my attention that she thought would be of interest to me. It was ‘Empowering Girls in Computer Science: Q&A session with Judith Bishop’, the Director of Computer Science at Microsoft Research in London at UCL.

Bringing programming to the younger generation has also been of interest to me as I feel it is something a lot of kids miss out on, only realising once it’s too late. Alongside this, empowering Women in IT is something I feel very strongly about; not because I am a woman, but because equality should be at the forefront of every company. As we are now starting the Kainos Women’s initiative, it seemed apt that I attend this conference.

I noticed that the audience was composed of an encouraging mix of both men and women, all interested in the one topic – empowering women in IT. On the panel were two women, neither of whom were Judith. She was running late because she had encountered a small group of school girls on her way to the lecture and was talking to them about programming. This is when I realised why someone like Judith had made the trip from the US to England for this session – she has the same dedication and enthusiasm for bringing IT to young girls (and boys) that many of us in Kainos share.

The panel itself was made up of three women.  Judith works predominately on creating links between Microsoft’s research groups and universities globally. She cites interesting projects from the research lab, and then finds accompanying students that will pair well with said projects. Her main aim is to have software developed, not just by software engineers, but by the people who will use it. Jane (an ex Cisco employee) who now works as the industry liaison outreach officer at UCL, has 23 years of experience in the IT industry and now uses that experience to help mentor and pass on helpful information to prospective computing students. Irena has worked for Facebook for 7 months as a software engineer, predominately on the gatekeeper program, which is used to roll out any new features to specific areas around the world, depending on cultural differences/laws. Before working for Facebook, Irena was studying Computer Science at a top university in Romania.

All three women shared the same view – there seems to be a “trigger” or “barrier” for girls interested in computer science. Up to GCSE level, there are predominately more girls in STEM subjects, but at A-level, these numbers drastically drop as girls tend to choose biology, history, or chemistry; subjects that lead to Medicine or Law pathways. Jane described the problem as a “leaky pipeline” where we start to lose girls along the way due to them not wanting to study an A-level that none of their peers are studying, not feeling confident enough to study an intense subject that requires a lot of logical thinking, or merely not wanting to feel isolated in a predominately male classroom.

A recent study, organised by the Campaign for Science and Engineering, found that in 2013 only 245 girls took Computing for A-level in the whole of the UK (6.5%) compared to 3513 boys (93.5%). Only 20% of girls take A-level Physics, despite doing well in large numbers at GCSE. Those girls that do take A-level Physics outperform their male counterparts in achieving A grades by over 5%. This year only 18 more girls did physics compared to last year (+0.2%) compared to 1042 extra boys (+3.8%), so the divide is worsening, not getting better.

Judith went on to tell us more about her background and why she chose computer science at university. For her, the choice was clear. She wanted to do something that was computer orientated. She stated that the first time she was able to program on the one computer that was shared with her entire school, she “fell in love with it” and couldn’t keep away. She has always loved problem solving and becoming a programmer allowed her to focus entirely on that, whilst using cutting edge technology. Her love of travelling also played a part and working in such a forward moving industry has allowed her to work all over the world. Furthermore, she said that the number of boys in her class also made her choice easy.  As you’d expect, this caused a few chuckles, but I admired her honesty.

A common view for women in IT tends to be that they are treated differently and aren’t always accepted by their male counterparts. One student mentioned that they could never be sure that when they were accepted for a job it was due to their skills and ability, not because they were a woman and the company had an equality quota to meet. Judith addressed this point, stating that she has always been accepted by her male colleagues and has achieved her status by the level of her work, not because of her gender.

However, despite Judith’s experiences, studies have shown that many women are not quite so lucky. In Sheryl Sandberg’s (COO of Facebook) book “Lean In: Women, Work, and the Will to Lead”, she states that women are 57% of college graduates and 63% of Master’s degree holders, but that majority fades as careers progress. Only 21 of the Fortune 500 CEOs are women and despite thriving in university, only 18% of the US congress is female.

Sheryl holds the view that there are many reasons for this. She believes women have to prove themselves more than men and a McKinsey study has shown that men are promoted based on potential, whereas women are promoted on accomplishments. Due to problems like this, she believes that a lot of women lack the confidence to put themselves forward for promotions. In a survey of 4,000 employees at large companies, 36% of men said they want to be CEO. Only 18% of women said the same. Check out this video where Sheryl discusses why we have too few women leaders.

One of the main points reiterated throughout the session was that there are not enough women in senior roles, because women may not put themselves forward for a promotion, whereas men will. Have a look at this article which discusses the ‘gender competition gap’. Personally, I believe that is not an issue here at Kainos. We have many women in senior roles and gender is not an issue when it comes to someone having a voice. Anyone can speak up and be heard.

After the main issues had been addressed, the audience were invited to ask some questions. The listeners (primarily made up of students and teachers) were mostly interested in how to get girls into Computer Science. The resounding answer from the panel was a need for more female role models for students, not just at university level, but also at secondary school. There is a need for a mentor system and the point was made that it would be beneficial to have “IT camps” for young girls. Firstly, at Kainos we have covered this area twice, with both CodeCamp and AppCamp, where we have had many female attendees. But hopefully, as part of our Kainos Women’s initiative, we can branch this out to a female-specific camp.

The bulk of the audience made the point that women are not necessarily as confident as men in the IT industry due to being a minority. Several audience members stated that they wouldn’t feel confident enough to manage a project by themselves, manage several other engineers or even compete for a job against a man. One of the panel’s suggestions was to ensure a work place is not just a work place, but rather a community filled with encouraging people who you can get along with and possibly form friendships.

This is something Kainos actively helps with by organising events for the entire company, making us a stronger unit inside and outside of work. I personally think this is a good suggestion, however there needs to be more work in creating practical equality in the work place. In order to do this, the best solution is to hire more qualified women. But in order for more qualified women to exist, we need to dispel the notion that the IT industry is for men only. The Wall Street Journal reports that last year 11% of U.S. tech start-ups have female founders or CEOs, while venture capitalist Fred Wilson said only 3% of the pitches he received last year came from women.

Overall, I have come to the understanding that women need more exposure to what a career in IT is actually like. There is a view that there is only one role in IT, when realistically there are many, all suited to various strong points and personalities. Work needs to be done to show women that working in IT is not one dimensional, but rather, there is no limit to what you can do in this industry. Simply put, ‘what you put in, is what you will get out’, regardless of your gender.

If you want to be involved in our Kainos Women’s initiative, please don’t hesitate to contact us by tweeting to https://twitter.com/KainosWomen. You don’t have to be a woman to help women in IT. 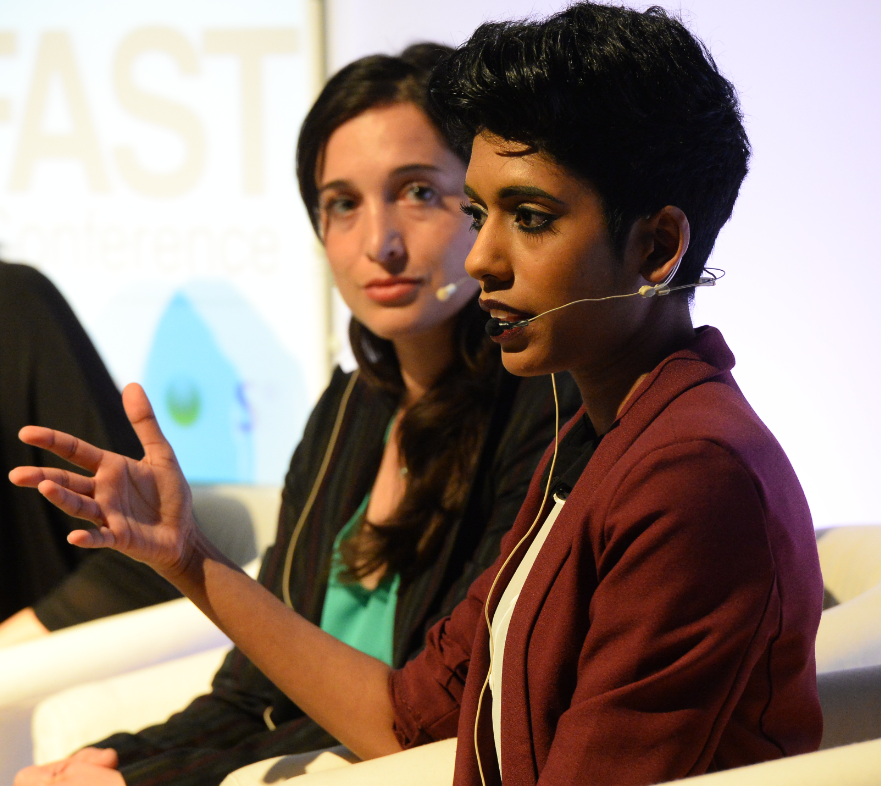 About Sheree Atcheson
Sheree is a 23 year old QUB Computer Science alumna (primarily based in Belfast), currently working as a software engineer with Kainos Software. Alongside her work in Kainos, she is also the Women Who Code UK Founder (Belfast and London), which aim to eradicate the gender bias in the IT industry by creating a local havens for tech women through monthly hack nights, tech talks and career trainings.
View all posts by Sheree Atcheson