Our Thinking
Kainos and AI: The AI NI Hackathon; How We Won It, What We Built and Why Hackathons Matter 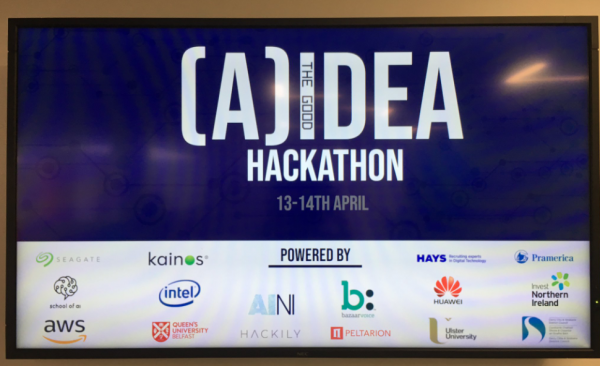 “Networking the Northern Ireland AI community is the core mandate that drives AI NI. This will be achieved through organising events that target a wide range of demographics that include companies, students and academia.”
– AI NI﻿

On the 13th and 14th of April, AI NI held their ‘Good AIdea Hackathon’. The theme of the event was ‘AI for Good’, and it turned out to be the largest hackathon ever run in Northern Ireland with over 200 attendees taking part across two locations.

As a member of the Kainos AI Practice, I felt like this hackathon would be a good chance for me to show off and improve my skills and knowledge in AI. My team consisted of myself and the other software engineers from the AI Practice. We decided beforehand that we were going to enter this hackathon as a team.

There were three challenges that attendees of the hackathon were able to take part in:

1: The Peltarion Challenge. This involved taking data from hearing aids and using AI to help improve them. The example idea given was to help allow the hearing aids to eliminate sound coming from more than one source using AI to detect different voices and background noise.

2. The BazaarVoice Challenge. This involved taking reviews, both legit and bot-generated, and trying to build an AI model that could tell the difference between them. This is the challenge that my team decided to take on.

3. The AI NI Challenge. This was a challenge for any other ideas that the teams had that fell under the banner of ‘AI for Good’.

As previously mentioned, our team took on the BazaarVoice challenge, but we also had a mindset focused on how we could take that and use it as an ‘AI for good’ in order to also fulfil the criteria of the AI NI challenge, which gave us the potential idea of using something like this to detect cyber bullying in tweets. This manifested in the idea of a Google Chrome extension to help users detect fake reviews by allowing users to select a piece of text, for example a review for a product on Amazon, and then this would be run through a classification algorithm and classified as either ‘real’ or ‘fake’ and this would be shown to the user. We also decided to build a webapp with the same functionality to ensure that users who aren’t on Google Chrome would be able to benefit from the use of our project. This would connect to the same API as the Chrome extension (more on that later).

We had a few challenges and obstacles to overcome to make this project a reality. First of all, accuracy is a big deal when it comes to AI and so we had to build our project to have the highest accuracy possible (which ended up being 95.75%). This is important as it cuts down on the number of falsely flagged reviews (i.e. false positives and false negatives). Additionally, we didn’t really have much experience in building Chrome extensions, so this was something that we would have to learn. We also had to set up a repository, branches and automated testing.

We were given a T-shirt as a thank you for attending the event. We were also given free food and drinks for the weekend, as well as water bottles and AWS credits.

We arrived at the hackathon between 9 and 10 AM on Saturday. Once all the attendees had arrived, we were taken into the lecture theatre where we were briefed about all of the events that would take place over the weekend, the challenges that we would be taking part in, and the prizes that the winners would be receiving. Workshops were given based around data science, text classification and pitching.

After this, we got back to our room and we started to work on our project. We initially started by planning out what we would do and setting up a Kanban board to be able to track what had been done, what was currently being done, and what needed to be done. This gave us a good idea of all the work that we needed to put into our project.

Our first step in our development was the ‘Data Analysis’ stage, which was for us to familiarise ourselves with the datasets we were given and perform some exploratory processing on it (using pandas to combine data sources and normalise the data, and each team member conducted an independent investigation into the data to gain an unbiased intuition about the approach to solve this problem).

In order to build our classification model, we needed to decide on two things: a vectoriser, and a classifier. We decided that the best way to do this would be to set up a ‘matrix’, testing each of three vectorisers against each of three classifiers and finding the accuracy score of each combination. We also used grid searching in order to find the optimal parameters in order to get the best accuracy.

We ensured that it was a fair test by making sure to keep the same test sample size and seed (a value that the data is randomised in a set way, and can be replicated). This means that all of the different vectorisers and classifiers could be compared fairly and none would have an unfair advantage against the others based on the training data.

We found that using a ‘Bag of Words’ vectoriser along with a ‘Neural Network’ classifier gave us the best results so that’s the combination we decided to use.

Our team put an emphasis on working under good data science principles, in a measured way that put a process around how we write and review different AI models and components. In addition to the three classifiers and vectorisers that we had put to the test, we also ran a test on BERT, which is a Google-developed deep learning natural language framework built specifically to be able to tackle any natural language machine learning problem. Due to BERT’s low level implementation and the time it takes to be trained, we did not integrate our BERT model into the full system and instead built that with a simpler model that we were able to validate much quicker.

Meanwhile, we also had to take frontend development into consideration. As previously mentioned, we decided to build a Chrome extension and a webapp. I took on the responsibility of leading the dev work on these frontend implementations. Having never worked with Chrome extensions before, I decided to read through some tutorials in order to make sure I understood how they worked, then got started building ours.

It was quite easy to get it up and running. It would simply take what the user had selected and send it to an API endpoint, then return the response from the endpoint.

By the end of the day, we had filled in our ‘matrix’ of accuracies, which ranged from 61% to 95.75%, and had finished the Chrome extension and webapp. We had to implement some pair programming and collaboration strategies to overcome a few difficulties, for example trying to use embedding values from a file.

On the Sunday morning, the only thing we had to do in terms of development was to finalise the API and tie everything together.

Once we finished that, it was time for us to start working on our pitch. We decided to split up the pitch into different sections which the members of my team would present — one member would give an introduction, another would give the technical details, I’d give the demo and another would answer any questions the judges had.

We created a presentation to go with our pitch which we all worked on collaboratively. I recorded our project being used and inserted that as part of the presentation.

Our team were the first ones to present to the judges, who were really impressed by our ideas. Once we finished, we went out as a team for lunch and came back for the prizegiving.

There were a number of spot prizes, as well as the main prizes which went to:

3rd Place — DiverseCV, which is a system to remove the potential of both intentional and unintentional bias by redacting sensitive information from applicants’ CVs before the employer can view it to pass judgement.
2nd Place — Team Blackball, who created a system to help teach users spell their names in British Sign Language using image detection.
1st Place — Tied between Team Fletch and my team, who both created systems for telling fake and real reviews apart.

There were a lot of good ideas and a lot of very well-made projects, a lot of which are incredibly innovative and could potentially be used to help a lot of people in the future.

This leads me on to my final point of this article, why hackathons actually matter.

For me, the time constraints put on attendees of hackathons means that they will have to focus on the most important things and not get bogged down on small details. It encourages a way of thinking through problems to find and implement a solution in the fastest time possible. It builds confidence in the abilities of developer and enables them to learn and improve their skills in a way that normal development simply can’t replicate. From my own perspective, I believe my skills and confidence surrounding AI have improved as a result of this hackathon, and I hope to be able to use and improve these skills in work projects and in further hackathons. 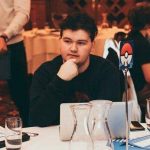 About Conor McCormick
Conor joined Kainos in 2018 as an Apprentice Software Engineer as part of the Earn as you Learn scheme. He has done work for the AI Practice.
View all posts by Conor McCormick