Our Thinking
Mentoring the iOS developers of the future
Kelly, Graduate Software Engineer discusses working at Kainos for the first year of her career in IT.

“I think I’ve learnt more in one week of AppCamp than in a whole year of uni” – A quote from one of our AppCampers this year, and no, we didn’t make her say that!

How I got here…

After an amazing placement year with Kainos where I got many opportunities and gained much more experience than I imagined I would have, I wasn’t looking forward to returning to university for final year. After what felt like the longest year of studying, I finally graduated and returned to Kainos as a Software Engineer.

My first project on my return was AppCamp. Kainos AppCamp gives students the opportunity to be mentored by professional software developers, to learn the basics of mobile app development and build their own app. My role was to be one of two mentors. This is the sixth year of AppCamp and the format (two weeks training and six weeks developing an app) stayed the same, with the only change being the development language. This year saw the first year of developing with Swift instead of Objective C, meaning there was a lot of preparation to do!

I returned to Kainos a few weeks before AppCamp started and worked with Alex, the other mentor for AppCamp, and wrote all of the Swift/iOS tutorials and challenges to be completed by the AppCampers during training. I also had to upskill in Swift at the same time, as I had been developing iOS applications in Objective C in my final year and on placement. This was a great learning experience for me.

18 students attended the first two weeks of training, where they learnt the basics of Swift / iOS development and began to plan the App idea they were going to pitch at the ‘Dragons Den’. As a mentor, not only was it my job to help the AppCampers work through any problems they faced in the tutorials, but also to talk through their app idea and help with their pitches.

Aside from code tutorials, we organised talks from Kainos employees ranging from ‘Developing with non-functionals in mind’ to ‘UX Design’ and ‘Persisting data with Realm’. If that wasn’t enough fun, we also held some challenges with the chance to win cool prizes. Within a week, the campers went from having never developed an iOS app to developing apps with iBeacons and integrating with tools like Facebook.

After two fun weeks of tutorials, demos and challenges, it was time to pitch the apps. With such a high standard of candidates and some interesting pitches, the Dragons had a tough decision on their hands deciding on the ten finalists. Following a long day of pitches and deliberating between the judges, the finalists who would go on to develop their app in Kainos for the next six weeks were decided.

The first week of development was spent planning the apps and introducing the AppCampers to Agile development. The AppCampers came up with user stories, drew up wireframes and by the end of the week they planned which stories they would bring into their first sprint. They were also lucky to have Sean Treanor – a placement UX Designer, who worked with each student to design their logo, decide on a colour scheme and provided detailed screen mock ups. This enabled the students to consider and implement UX & design in their apps from the very beginning.

With app ideas ranging from helping truckers to find service stations on long routes within a time limit to drawing quilt design sketches and using machine learning techniques, the mentors didn’t have an easy job. We had to help plan and design the architecture for ten different apps as well as coming up with algorithms for some of the more complicated apps.

The remainder of the 6 weeks included a lot of hard work from our dedicated AppCampers as they strived to develop their app further each week. Although they were working on their individual apps, they also worked with each other to work through problems and pass on their knowledge. Due to all of this, they have produced high quality apps, including:

As AppCamp draws to an end, the campers have had a busy week ahead preparing their apps to be uploaded to the App Store and giving demos to Kainos employees. Aside from developing their technical skills this summer by learning a new programming language and development platform, they have also enhanced soft skills such as presenting, communicating, teamwork and confidence.

It’s not just the students who took a lot from the AppCamp this summer – it has also been rewarding as a mentor. Over the past six weeks I have planned the architecture of various apps, solved problems I had never come across before, enhanced my presentation and communication skills, and learned how to manage many apps and students at once. It’s been a long and busy eight weeks, but both the students and us as mentors have come out with a lot to take away. For the first few months of a graduate job, I have learned a lot and upskilled in many areas and these are skills that I will carry with me throughout my further career.

If you would like to catch up on what we got up to in the last 8 weeks, check out the website here, follow our twitter @KainosAppCamp and keep an eye out in April 2017, when our winner of AppCamp will be announced.

Interested in a placement or a graduate career at Kainos? View our vacancies! 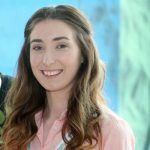 About Kelly Moore
Kelly joined Kainos in 2014 in her placement year as a Software Engineer. She has worked as part of the Applied Innovation team and has lead Kainos AppCamp and AICamp. Currently, she is working with machine learning technologies.
View all posts by Kelly Moore